The heritage line stretches for 11 miles through the beautiful Sussex Weald countryside. The Bluebell Railway Preservation Society owns the railway and do a fantastic job of raising money to restore, maintain and further improve the line, with members being mainly volunteers with a passion for the railways. 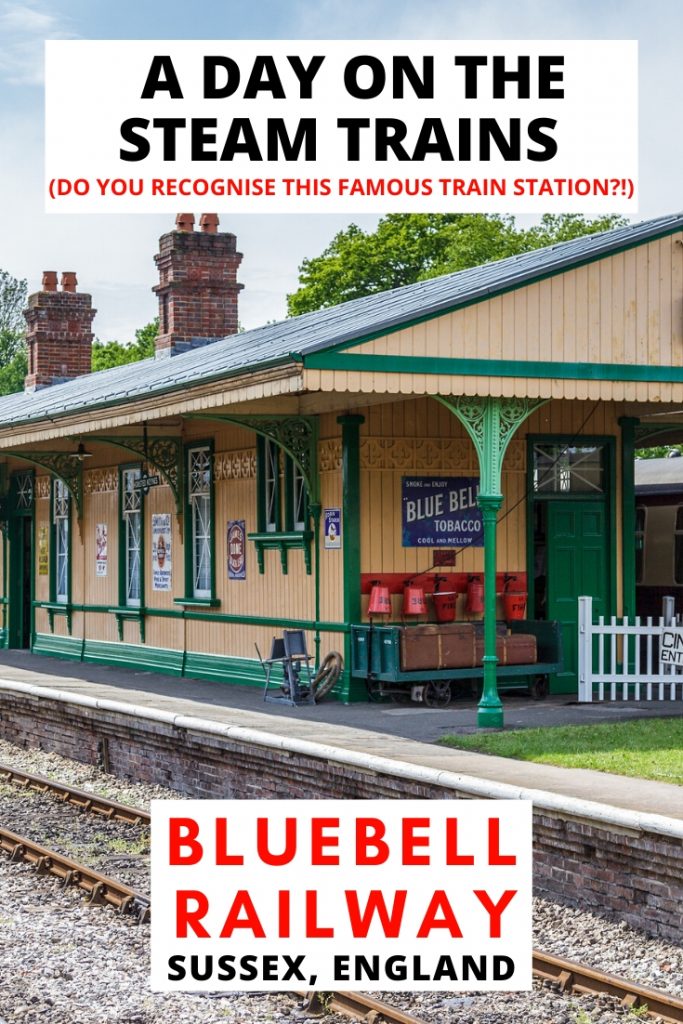 In March 2013, the railway was extended and began running to the terminus station in East Grinstead, meaning that there is now a convenient connection to Southern Railway. It appears as one of our featured day trips from London.

The locomotives operate between the stations of East Grinstead and Sheffield Park, with stops at Horsted Keynes and Kingscote. The collection owned by the society is the largest collection of steam engines in the south of the country.

The 22 mile round trip on one of the steam trains is an incredible experience, delivering some stunning views of the local area. However, the Bluebell Railway is much more than just a train ride. Each train stop along the way offers something for the visitor, both adults and children.

The train ride takes about 40 minutes from beginning to end and you can get off at each stop as you wish. You can begin your journey at Sheffield Park or East Grinstead, but if you are coming by train from London it makes sense to start in East Grinstead.

Things To Do On The Bluebell Railway

A short walk away from the station is Sheffield Park and Garden, owned and managed by The National Trust. The estate dates back several centuries having had many different uses over the years.

The 300 acres of parkland is the perfect place to explore the trails and discover woodland walks. The area is home to a wide range of wildlife including dragonflies, kingfishers, birds of prey and butterflies.

Children will love the woodland play area at Ringwood Toll where they can practice their balance on the beams, get involved in some den building or climb the log wall.

The informal landscaped garden has 4 amazing lakes which make for a stunning photo opportunity. Explore the paths that surround the lakes through the glades and wooded areas.

You may be familiar with Horsted Keynes station from the popular TV series, Downton Abbey. Built in 1882, once upon a time the station was a junction station. The Bluebell Railway have restored the station to the mid 1920s age.

Visit the award winning Carriage and Wagon department where all the restoration of carriages happens. There is a viewing gallery accessible from platform 5.

Horsted Keynes is a small village with two local pubs, both serving real ales and traditional pub food. The village church, St Giles, was built over 900 years ago by the Normans.

Former Prime Minister Harold Macmillan is buried in the churchyard – he had a private home (Birch Grove) in the area. American President J.F. Kennedy stayed at Birch Grove on an overnight stay a few months before he was assassinated in Dallas, Texas.

Kingscote Station was built in 1882 and restored by the Bluebell Railway to the mid 1950s era.

There is a great picnic area behind platform 2 where you can watch the trains as you eat.

In the heart of Kingscote Valley set within 2,500 acres, connected by pathways and bridleways, sits Kingscote Vineyard, a fully functioning winery, vineyard, restaurant and sales area.

With 15 acres of the classic Champagne triumvirate planted so far, accompanied by a 2 acre modern-planted apple orchard for creating the tasty Kingscote Sparkling English Cider.

The platform at East Grinstead for The Bluebell Railway was opened in March 2013 and has opened the line up to train visitors on the line from London.

The ancient market town of East Grinstead is well worth a visit, either prior to your Bluebell ride, or after. The main centre is about a 5 minute walk from the station and has all the usual high street shops alongside independent and unique shops which are worth a visit.

The old high street has one of the longest runs of 14th Century timber framed buildings in the country.

The town also has a small museum documenting the history of the area, including the events of WWII.

Sackville College, built in 1609, is at the far end of town where the Christmas Carol ‘Good King Wenceslas’ was written.

To find out about ticket information and special events check out the Bluebell Railway website.

Getting To The Bluebell Railway From London

Train – the best way to get to The Bluebell Railway from London is to take a Southern Railway train from London Victoria (services run every 30 minutes.) The train takes under an hour.

Money Saving Tip: Book your train tickets via the Days Out website and get a 2 for 1 entry to the Bluebell Railway!

Car – East Grinstead is about 30 miles from central London and will take about 1 hour and 10 minutes to drive. There are a number of pay and display car parks in and around the town.