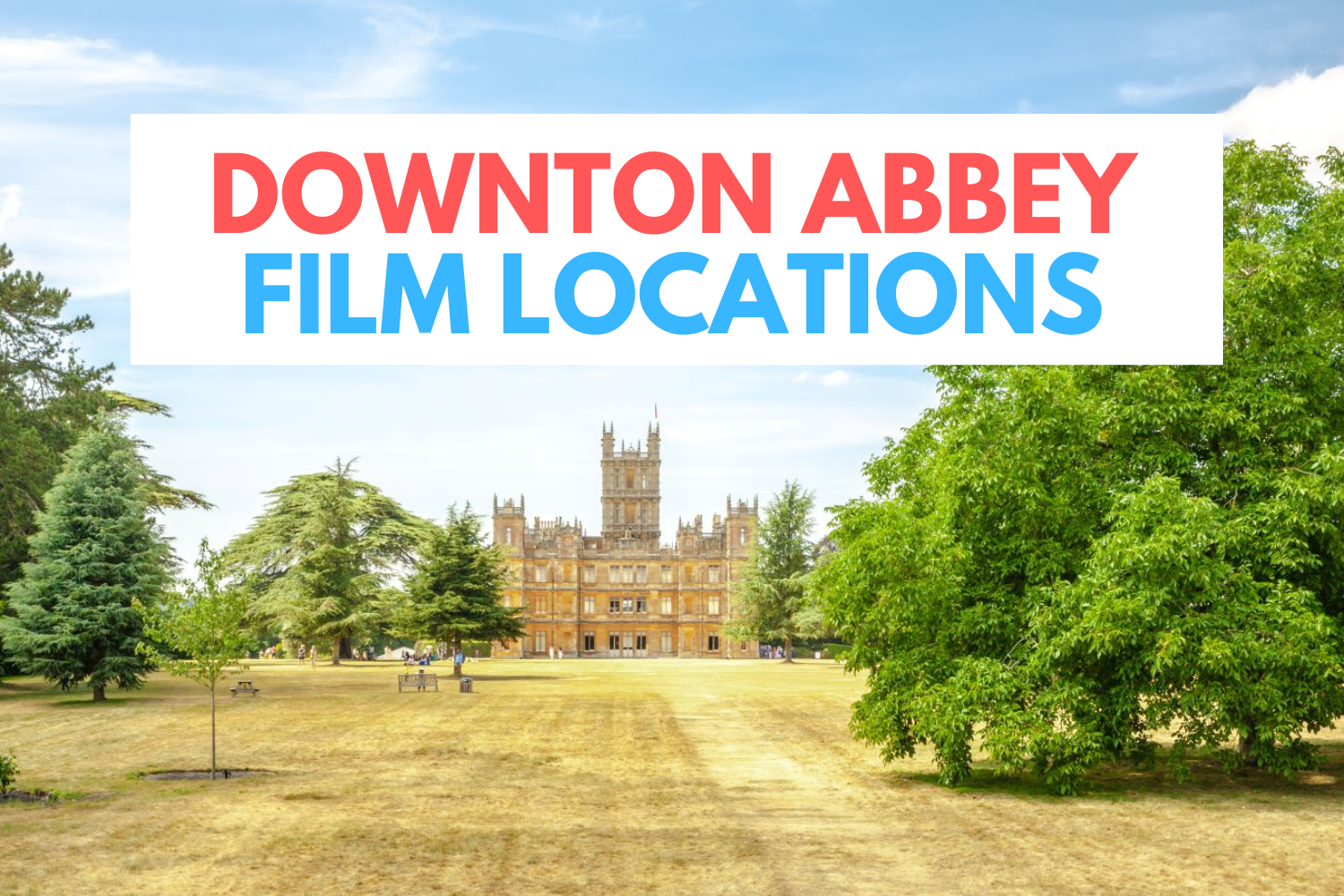 Are you a Downton Abbey fan? Us too!

If you’re keen to follow the Crawley family’s footsteps and relive your favourite show moments, you’ll love this guide to the Downton Abbey film locations.

Downton Abbey follows the lives of the aristocratic Crawley family and their servants in the fictional Yorkshire country estate of Downton Abbey.

The series spans the years 1912 to 1926 and depicts events such as the sinking of the RMS Titanic, the outbreak of World War I and the interwar period.

Where Is Downton Abbey Filmed?

Read on to learn more about the Downton Abbey filming locations, which ones you can visit, and how to best do it.

The main home and most filmed location in Downton Abbey is the dramatically grand Highclere Castle. If you can only see one Downton Abbey film location, make it Highclere, it is a must-see for any Downton fan.

The writer and producer of Downton Abbey, Julian Fellowes, wrote the hit series with Highclere Castle in mind – he has been friends with the Carnarvon family for many years.

For many people, the television show Downton Abbey was their introduction to the impressive Highclere Castle. The castle, located in Hampshire, England, is about an hour’s drive from London, making it a perfect day trip from London if you are staying in the capital.

Highclere Castle has been the home of the Earl and Countess of Carnarvon and their ancestors since 1679.

Highclere Castle is still home to the 8th Earl and Countess of Carnarvon and their children. The castle is open to visitors from April to October when they are not in residence. Visitors can tour the public rooms of the castle as well as the gardens and grounds.

Getting To Highclere Castle

If you are staying in London, the easiest way to make the most of Highclere Castle is on an organised tour.

You can get there by train if you prefer to visit Highclere independently. Direct trains from London Paddington station take about an hour and a half. Once you arrive in Newbury, it’s just a short taxi ride to the castle grounds.

If you’re driving from London, it will take you about two and a half hours.

Admission and ticket options vary throughout the year; if you plan to visit Highclere outside of an organised tour, check the website and book tickets directly there.

Keep in mind that there are only a certain number of tickets available daily, so it’s important to book in advance.

There are general admission days, guided tour days and some special events throughout the year. You can purchase tickets on the official Highclere Castle website.

In the show, Downton Railway Station is located in the village of Ripley, Yorkshire. However, the filming location for this scene was actually at Horsted Keynes railway station in West Sussex.

The Horsted Keynes railway station is located on the Bluebell Railway, a heritage steam railway running through East and West Sussex countryside.

The Bluebell Railway is one of the oldest preserved railways in England and is a great day out for families and train enthusiasts.

The Bluebell Railway operates between the stations of East Grinstead and Sheffield Park, with stops at Horsted Keynes and Kingscote.

This stately home was used as a filming location for several key scenes in the show’s sixth and final season.

This 18th-century house is one of the finest examples of Palladian architecture in England and is set on beautiful grounds that include an 18th-century garden, a lake, and woodland walks.

West Wycombe Park was built between 1740 and 1748 for Sir Francis Dashwood, 2nd Baronet. Dashwood was a wealthy man who made his fortune in the City of London.

The house remained in the Dashwood family until 1942 when it was sold to the National Trust. It is now open to the public for tours and also hosts occasional events such as concerts and exhibitions.

The village of Bampton, which served as the stand-in for Downton Village in the hit TV show, is a real place, and you can visit it.

Located in West Oxfordshire, Bampton is just four miles from Witney. If you’re planning a trip to this charming English village, there are a few recognisable landmarks from the show that you won’t want to miss.

From the gorgeous honey-coloured stone buildings to the quaint little green spaces, Bampton is the perfect setting for a period drama. And with so many landmarks to explore, you’ll feel like you’ve stepped right into an episode of Downton Abbey!

St Mary the Virgin Church: This lovely church served as the backdrop for several scenes in Downton Abbey, including Lady Mary and Matthew Crawley’s wedding. The church dates back to the 12th century and is well worth a visit for its stunning architecture and centuries-old history.

Church View is one of the main streets in Bampton, home to the fictional pubs, The Grantham Arms and The Dog & Duck; it is also the location of the Downton Fair.

Churchgate House: This grade II listed building was used as the exterior of Isobel Crawley’s house in Downton Abbey. Situated just opposite St Mary’s Church, Churchgate House is one of the most iconic buildings in Bampton.