There are many famous landmarks in England. England is an iconic destination, on many people’s bucket lists. Whether it’s to explore the green hills, rocky coasts, spectacular castles, or perhaps, to hear the chimes of Big Ben.

Popular And Famous Landmarks In England

If you are lucky enough to find yourself visiting England, take a look at our list of top attractions to visit. Yes, as expected, some are in London, and some are included in our popular Day Trips From London guide. Others are slightly further afield, but as England is such an easy country to travel in, you shouldn’t find any destination too tricky to get to.

This is one of the world’s most famous prehistoric monuments and is top of many visitor’s lists. Located in Wiltshire, England, Stonehenge was built by Neolithic builders, and it is believed that this monument took almost 1500 years to build. One of the key features is a ring of roughly 100 standing stones that weigh about 25 tons. The peculiar thing about these stones is that they’ve been arranged in a circular pattern.

This landmark is regarded as a special British cultural icon and was once commonly used as a burial ground. It did serve other purposes as well; however, those aren’t quite known.

You can visit Stonehenge as part of an organised tour, or make the journey yourself via car or public transport.

Visit English Heritage to find out more about Stonehenge. 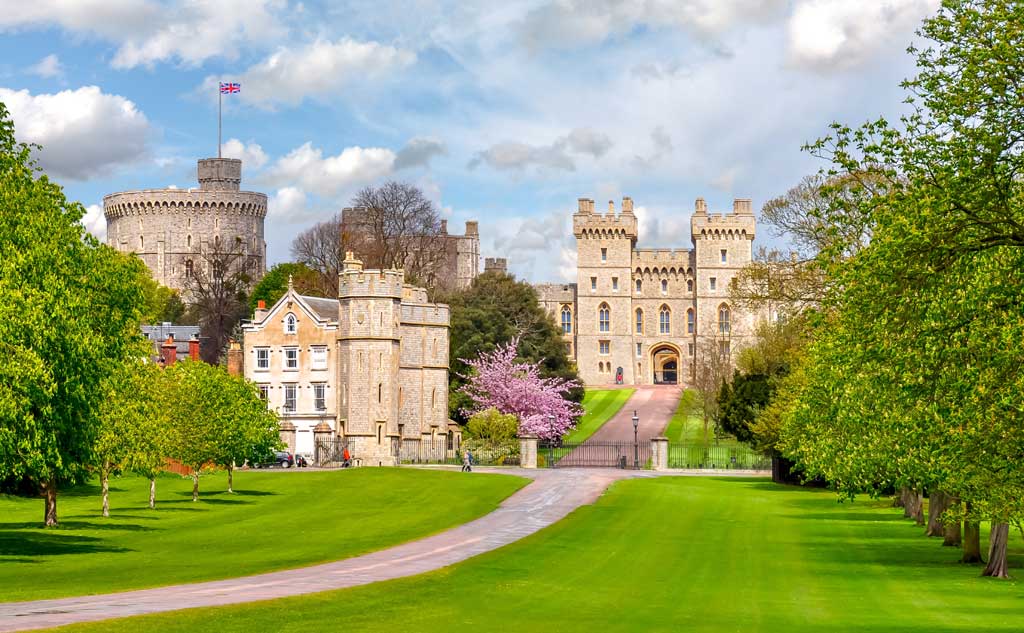 A trip to London is incomplete without paying a visit to the famous Windsor Castle. Windsor Castle is the oldest and largest occupied castle in the world, located in the county of Berkshire, but easily accessible from London.

For over 1,000 years Windsor Castle has been an official home to the British Royal family, with kings and queens using it as their weekend home. If the Royal Standard is flying when you visit, it means that Queen Elizabeth II is home.

The most striking feature of the Windsor Castle has to be its magnificent size, which is exactly 5.3 hectares/13 acres. The castle was built during the 11th century and now serves as a tourist spot with numerous areas to explore.

Don’t miss: changing of the guards!

Aside from visiting Windsor Castle and it’s grounds, the surrounding area is also worth exploring. 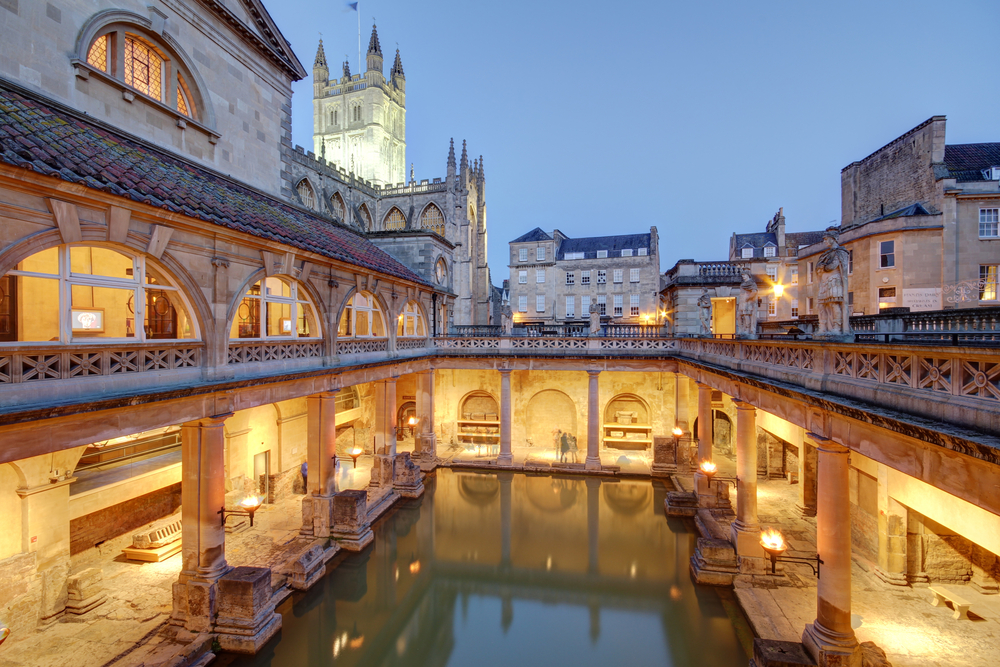 The Roman Baths are a popular tourist attraction, located in the City of Bath in the county of Somerset. Bath is a World Heritage Site, owing to it’s collection of incredibly well preserved Roman remains – the Roman Baths are one the most impressive religious spas of the ancient world. Impressively, the Baths still flow with natural hot water due to the city’s thermal springs.

The history of the Roman Baths is fascinating, and this site is the perfect location to learn all about it.

Buckingham Palace requires little introduction – it’s one of the most popular landmarks in England. Known the world over, the popularity of the official home of the Queen can be witnessed by the many visitors that stand outside it every day.

The palace has a total of 775 rooms that include bathrooms, guest bedrooms, offices, staff rooms, and many others. If you’re in London and you’ve not visited  Buckingham Palace yet, head straight there!

This has to be one of the most famous and renowned buildings of all time! It is set right in the heart of parliament square, making Big Ben and the Houses of Parliament extremely iconic and significant for the whole of Britain, if not the world. Big Ben, as we all know, is the clock tower located right next to the Houses of Parliament. The deep, thunderous chimes of Big Ben boom across the city every hour, and they are heard loud and clear by every single person.

The Houses of Parliament, on the other hand, was home to the British Monarchs and is also often referred to as the ‘Palace of Westminster.’ 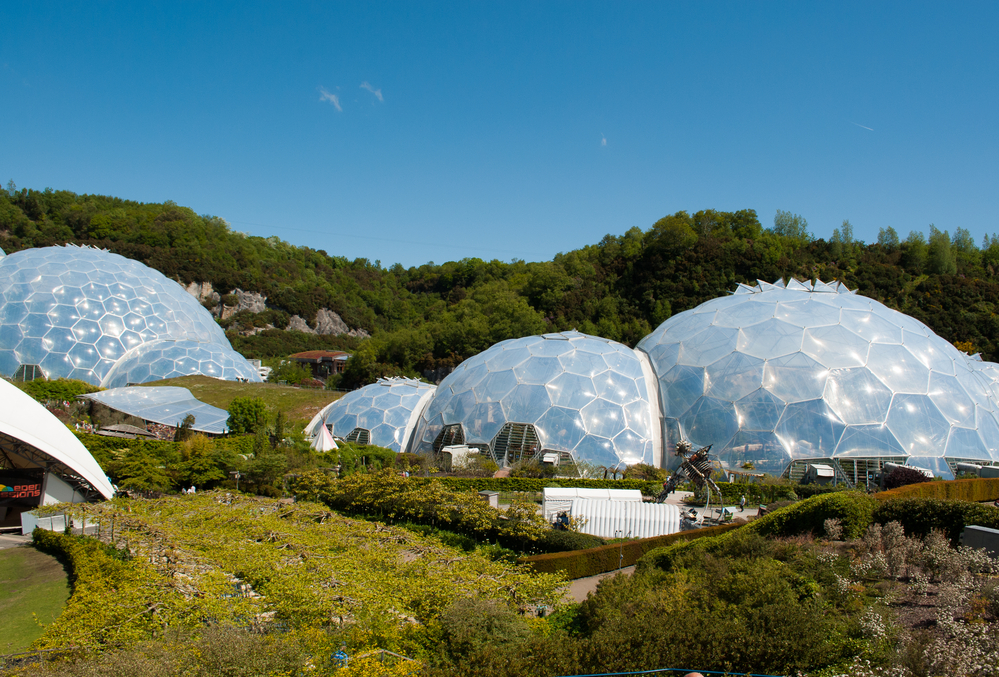 Often described as the ‘eighth wonder of the world’ by many people, the Eden Project is a must-visit site that you shouldn’t miss during your trip to the UK. It is situated in Cornwall, England, and is housed in tropical biomes that reside in a huge crater, covering an area as large as a total of 30 football pitches!

It serves as an educational charity as well as a dramatic global garden that offers deep insight into how humankind is so heavily dependent on plant life. It is an absolutely stunning site that lets you experience all kinds of sights, smells, and feelings like nothing else can.

Often confused with London Bridge, Tower Bridge is an iconic symbol in London and is clearly a more beautiful sight than the former. It is super famous all over the world and caters to thousands of fascinated visitors every holiday season. The bridge was opened in 1894 and is topped with two neo-gothic towers. It has a very medieval look and feel to it mainly due to the fact that it was built with the help of huge gray stones. Tower Bridge gives visitors a chance to walk along the walkway atop the bridge and create some special memories. 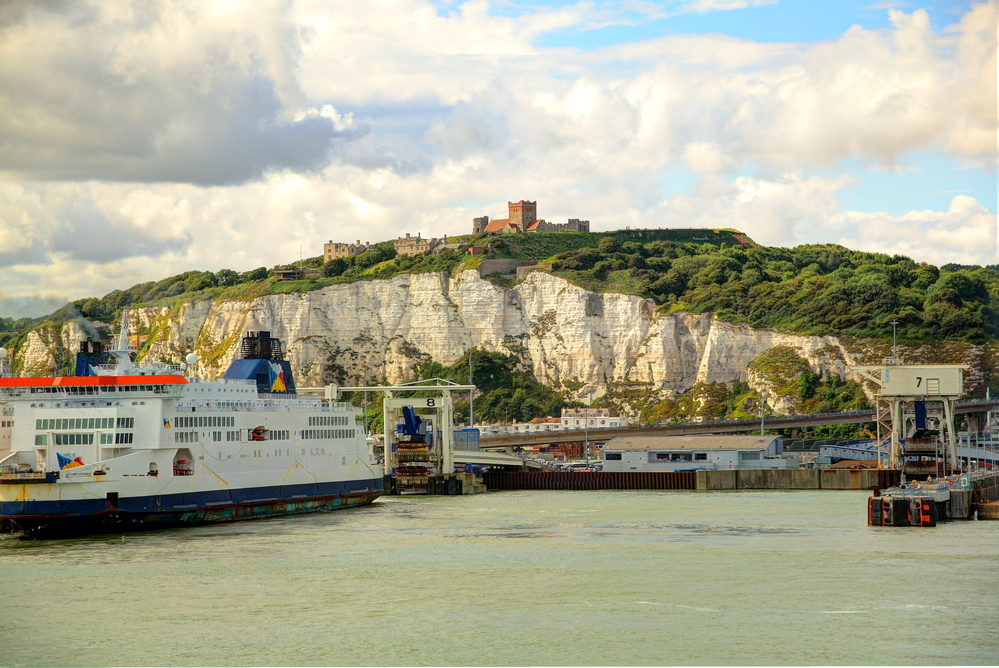 This is an official icon of Britain and is a part of the coastline of Kent in England. The main reason why it’s such an iconic landmark is the dazzling white chalk faces of the cliffs that reach almost 110 meters above sea level. The cliffs are largely characterized by thick layers of lush, wild grass that look absolutely gorgeous against the whiteness of the cliffs. It is home to some of the world’s most unique flora and fauna that you’ll only find here and nowhere else.

More than that, though, they hold such a special place in the world is because they have witnessed very dramatic and important moments in English history. These cliffs are considered to be a sign of freedom, hope, security, and optimism.

Also known as the Cathedral and Metropolitical Church of Saint Peter in York, York Minster is one the largest cathedrals of its kind in Northern Europe. It is one of England’s most famous attractions, mainly because it is filled with some of the most extraordinary and unique carvings, along with the best and the largest collection of Medieval stained glass windows. Another interesting bit about this inventive and architectural masterpiece is that it took more than 250 years to be built and finished from scratch. It is a majestic site that is full of grandeur!

Located in the Bloomsbury area of London, the British Museum is a place where you can learn more about the special events of two million years of human culture and history. It is one of the most important and largest museums in the world and is home to as many as seven million objects or more from all the continents of this planet.

The museum was opened back in 1759, becoming the third most popular museum in the world over time. What makes it such a must-visit landmark is the fact that the museum showcases documents and illustrations of every single story that took place in the history of culture and art.

From royal weddings and coronations to the presence of Kings, Queens, Heroes, and Villains, Westminster Abbey is one of those landmarks in England that has touched the lives of so many people. This World Heritage Site holds thousands of years of history, making it one of the most notable historic religious buildings of all time. It wasn’t just a place for coronations, but it has also served as a burial site for many British Monarchs. 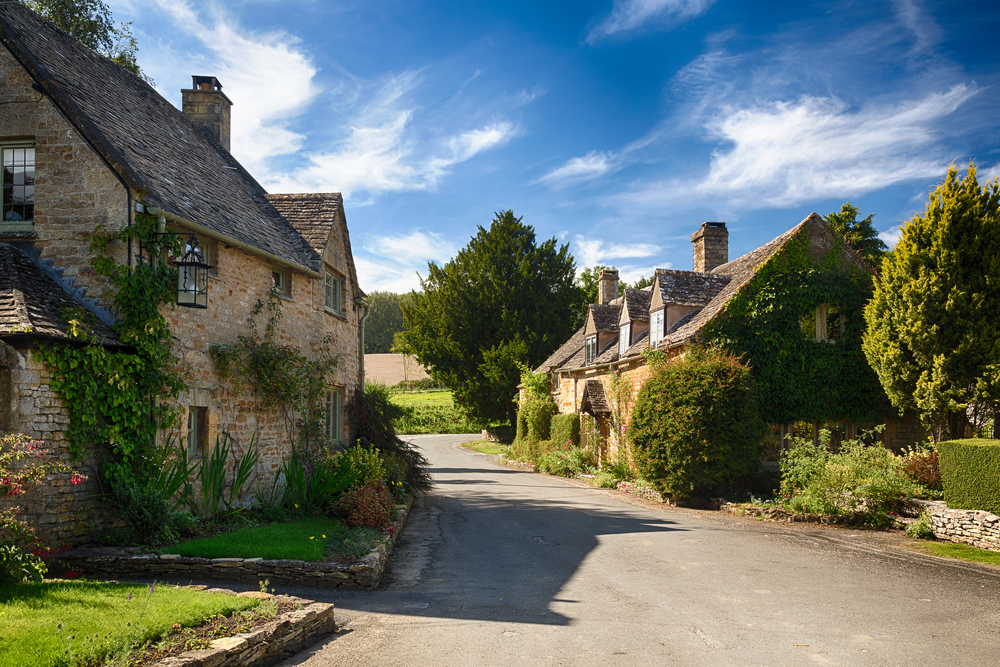 Known to be a very special place, the Cotswolds is a huge, 800-mile area in South Central and southwest England that runs through a total of five counties. The counties include Wiltshire, Oxfordshire, Gloucestershire, Warwickshire, and Worcestershire. The best part about the Cotswolds is that you get to explore so many areas, where each has a unique identity of its own. However, one feature is common in all areas: the golden stone with the rolling hills, also called the ‘wolds.’

Also a part of the World Heritage Site, Canterbury Cathedral is one of the oldest as well as one of the most popular Christian structures located in England. It was also a very important pilgrimage centre in Medieval England and held major political and religious significance during those times. Interestingly, the cathedral is often referred to as ‘England in Stone,’ mainly because of the way it is linked to the country’s history.

Also commonly known as Roman Wall, or Vallum Hadriani in Latin, Hadrian’s Wall stretches 73 miles from one coast to another. It served as the ultimate guard of the northwest frontier for the Roman Empire for almost 300 years and was first built on the orders of the emperor Hadrian. Hadrian’s Wall is also regarded as the Roman Empire’s most famous frontier, eventually being turned into a World Heritage Site in 1987.

It took six years to complete by the Roman Army and was later abandoned in 138 AD following Hadrian’s death, who was then replaced by a new emperor that came to power.

There are plenty of attractions to visit in the area too, there are English castles, ruins and monuments galore. Visiting this are would work perfectly with a trip to Scotland or the Lake District.

Find out more about Hadrian’s Wall.

This is a popular vacation destination in Cumbria in northwest England, mainly renowned for its rugged fell mountains, versatile market towns, historic sites, and beautiful glacial ribbon lakes. It is also home to a plethora of villages, towns, and valleys that you must visit during your trip to this national park. There are so many things to do at the Lake District, such as getting on the water, attending county shows and festivals, and discovering the art sculptures of the Grizedale forest, to name a few. It is an excellent vacation spot for adults and children alike, and it also ensures that you will have a great time!

Located on the English Channel coast of southern England, Jurassic Coast is one of the most stunning and diverse landscapes in all of England, which is why it became a World Heritage Site in 2001. This site is home to 185 million years of geological history across 95 miles of coastline. What makes it such a special landmark in England is the fact that it’s like a little cinema that shows you back to back movies, a trilogy of three of the most important geological time periods that includes the Triassic, Jurassic, and the Cretaceous. The best part is that you get to see extra scenes with added memories as well on this geological landscape.

Also known as ‘Stratford,’ Stratford upon Avon is a market town in the county of Warwickshire in England. It is located on the River Avon, which is approximately 91 miles northwest of London. This town is home to a thriving community that is brimming with unique shopping experiences, a wide variety of leisure opportunities, as well as comfortable accommodation.

However, the main reason for its massive popularity is that it is the birthplace as well as the grave site of a well-known poet and playwright known as William Shakespeare!  If you are a fan of English Literature and Shakespeare’s work, in particular, you ought to pay a visit to Stratford upon Avon.

So there you have it, our round up of the most famous landmarks in England. What’s your top pick?

PIN IT FOR LATER! 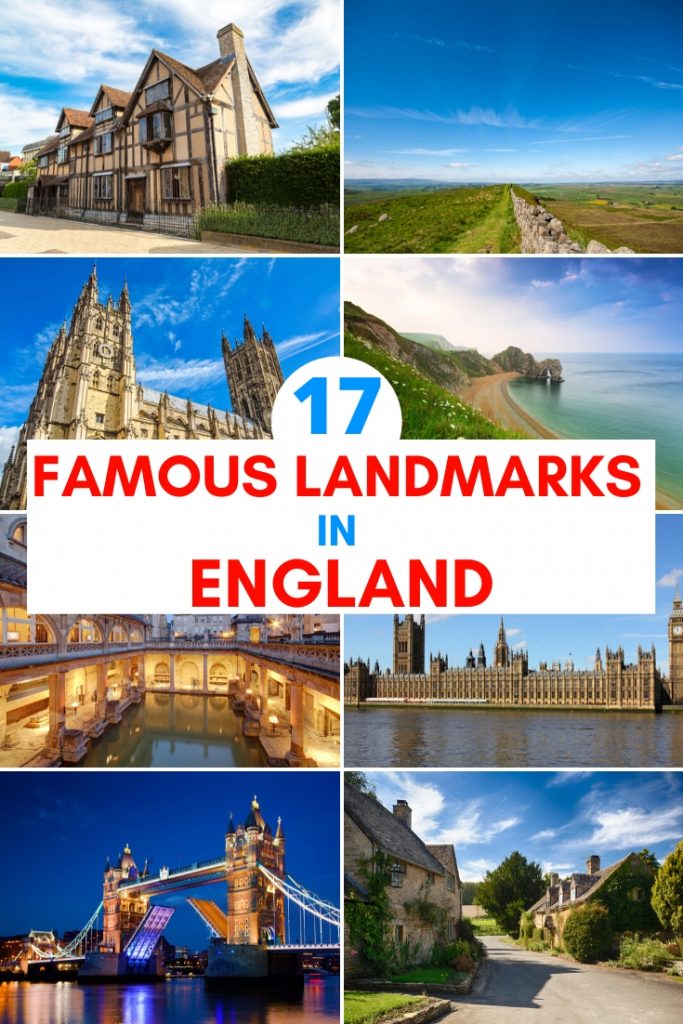